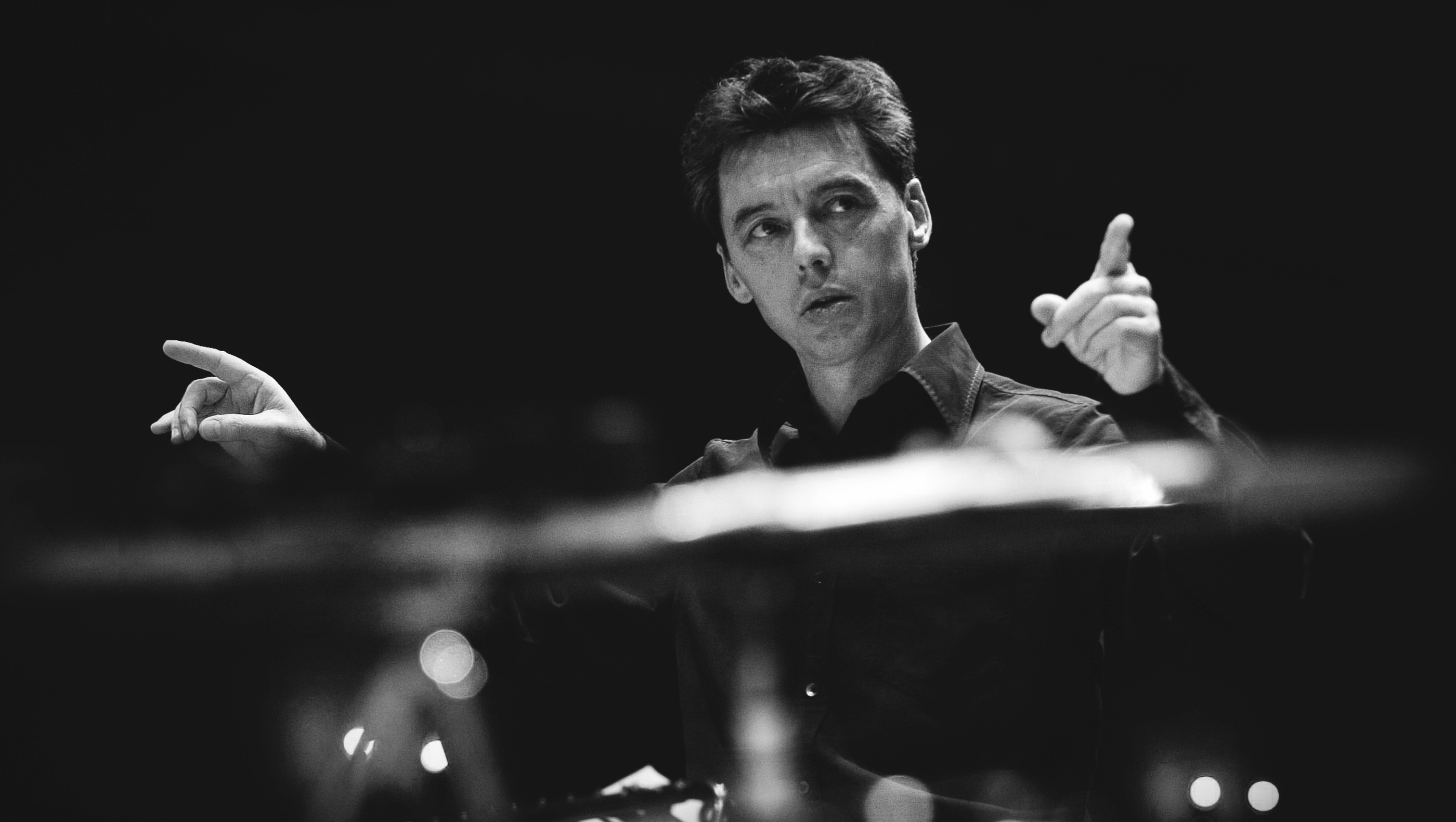 William Conway is an internationally renowned conductor and cellist, whose performances have been described as ‘astonishingly convincing’ (Opera magazine), ‘a tour de force’ (Guardian), with ‘a flair for the unpredictable’ (Financial Times). On the podium, he is known for his conviction, clarity and intelligent musicianship, while his collaborations with Hebrides Ensemble, of whom he is the Artistic Director and founding member, have been praised for their fresh and inspirational approach to programming.

Born in Glasgow, Conway studied at the Royal Scottish Academy of Music then London’s Royal College of Music before returning to Scotland to take the position of Principal Cello with the Scottish Chamber Orchestra, a post he held for ten years. He is a founding member and Co-principal Cello of the Chamber Orchestra of Europe and has worked with many of the great conductors including Abbado, Berglund, Boulez, Karajan, Guilini, Haitink, Harnoncourt, Maazel, Nezet-Seguin and Rattle. He is a passionate advocate of contemporary music, is the dedicatee of several works and has commissioned and performed a huge range of new works from composers such as Sir Peter Maxwell Davies, Sir James MacMillan, Nigel Osborne, Stuart MacRae and David Fenessy.  His work with Hebrides Ensemble, described by The Scotsman as ‘one of the most innovative and thrilling ensembles in Europe’ and now in its 30th year, underpins this commitment. By placing new music at the heart of a diverse range of repertoire, often in new and surprising contexts, Hebrides Ensemble encourages audiences to approach familiar music with fresh ears. His dedication to developing contemporary music has been recognised by an award from the Scottish Society of Composers for an outstanding contribution to new music.

As a conductor, he studied in Helsinki with Jukka-Pekka Saraste and was a finalist and prizewinner in the 1994 Leeds Conductors’ Competition. Since then, he has established himself as a conductor of versatility in chamber, symphonic and operatic repertoire, and has conducted the BBC Scottish Symphony Orchestra, Royal Scottish National Orchestra, Scottish Chamber Orchestra, Royal Northern Sinfonia, English Sinfonia, Chamber Orchestra of Europe (with whom he has made a CD recording released by Warner), and the Symphony Orchestras of Cairo, Sofia, Zagreb, de Filharmonie of Flanders, the Belgian orchestra Beethoven Academie, Teatro di Cagliari, Göettingen, Aalborg Sinfonie Orchester and  the American Phoenix Symphony Orchestra in all repertoires from baroque to present day.

He made his BBC Proms conducting debut in 2018 in performances of Stravinsky's The Soldier's Tale. His last concert pre-pandemic was to be with the oboe soloist Francois Leleux and Aalborg Symphony Orchestra before restrictions were imposed. Rehearsals all took place but sadly, not the concert. His first post-pandemic performance broadcast live on BBCR3 was in April 2021 in a performance of Passio by Arvo Part with Dunedin Consort and Hebrides Ensemble. H e has conducted many operas including Mozart's Magic Flute and Figaro, Verdi's Otello, Puccini's Tosca and Tchaikovsky's Eugene Onegin, the double-bill Cav/Pag, Puccini's Gianni Schicci  to Nigel Osborne's Differences in Demolition and Sir Peter Maxwell-Davies's Martyrdom of St Magnus. He is a regular guest with many young orchestras including the National Youth orchestras of Scotland and Australia. He teaches conducting at the Royal Conservatoire of Scotland.

He is Music Director of Edinburgh Studio Opera and is Artistic Director at St Mary’s Music School in Edinburgh.  He broadcasts regularly on BBC Radio 3 and has recorded for Deutsche Grammophon, Linn Records, Unicorn-Kanchana and Delphian Records in a series of highly successful recordings of music by Judith Weir and Nigel Osborne. His recordings with Hebrides Ensemble of music by Sir Peter Maxwell Davies and Sir James MacMillan have both reached no 3 and no 1 respectively in the classical music charts.

Please enjoy a selection of my past and recent performances.

Differences in Demolition - trailer from robert golden on Vimeo.

"This is an intelligently programmed album of intelligently constructed, sonically well-imagined music by one of Scotland's most innovative composers. Superb sound and excellent performances throughout"

"Rich, responsive performances do full justice to these works"

"As ever, Will Conway directed the music with skillkful ease and confidence"

The music [Cavalleria Rusticana] was stylishly directed by the steady hand of conductor Will Conway. Mascagni could not have hoped for better advocates than Edinburgh Studio Opera.

An inspired and satisfying evening of opera that not only delivers on an emotional level, but is likely to leave you hummimg the tunes on the way home.

Will Conway is well practised at bringing out the best in young musicians, as was evident here with a fine performance [of Cavalleria Rusticana]-well integrated, fresh and lively

14 of the very finest chamber musicians under the subtle directorship of cellist William Conway. Their playing of the demanding score was by turns commanding and achingly fragile with some superb solo turns

Maxwell Davies wrote Strathclyde Concerto no 2  in 1989 for William Conway, the [Scottish Chamber] orchestra's principal cellist at the time. Back as soloist 27 years later, Conway's relationship with this formidable work has grown and deepened.....Conway's warm tones and beautiful phrasing emphasise the elemental nature of the concerto.....

The core of the evening was William Conway’s unremittingly-intense performance of the Second Strathclyde Concerto, a long, sustained and difficult work in which Conway found and did not let go of the soulful, lyrical and searching quality of the piece, while Max’s typical orchestral writing, sometimes dancing lightly, sometimes with the trumpets screeching, garlanded the solo line, which was an exploration of the soul through the body of the cello

James MacMillan Since It Was The Day of Preparation

Directed by the work’s dedicatee, William Conway (who has, most effectively, the last word in the recording), the Hebrides Ensemble – each member of which is allotted a substantial solo in the interludes that punctuate the sung sections – provide eloquent testimony to the sustained impact of MacMillan’s writing.

The orchestral playing under William Conway is excellent... The string-playing, in particular, is superb [Carmen]

the orchestra (who were magnificent throughout)..For such a young company to produce a work of such masterful quality, with just as much energy and vocal strength at the end of the show as the beginning, sometimes you just have to be in awe. Bravo. [Carmen]

an unforgettable performance [of Verdi's Otello]

Under the expert baton of William Conway we were able to hear every single musical line and the structure of the work was revealed in full.
Musical Opinion Quarterly Jan-March 2016

Conductor William Conway [with Royal Northern Sinfonia] opened and closed the concert with Mozart: first a bubbling Marriage of Figaro..... it kicked the festival off with substance and style
St Mary's Haddington, Lammermuir Festival
The Scotsman 15 September 2014  ****

This was a fabulously characterised account of the [Soldier's] Tale, conducted by Will Conway.
Edinburgh International Festival
Herald 11 August 2014

For this programme was as potent a theatrical concept as a musical one....designed by Artistic Director William Conway as a seamless, uninterrupted, thought-provoking meditation.
Scotsman  15 February 2014  ****

...sometimes it's a history lesson; sometimes it's contrasting perspectives on an  idea; sometimes it's almost a theatrical experience. Such was the cleverness of....William Conway in this First World War-themed concert, that it took in all these things, and more. Best of all, despite it's dark subject matter, it refused to wallow in pity or nostalgia.
Telegraph 12 February 2014 ****

Once again Hebrides Ensemble's flair for programming, recruiting, preparation and performance ensured a life-affirming experience. So many wondrous voyages  in the care of such a compact crew, extraordinary!
Bachtrack 21 October 2013 ****

William Conway, an artistic director with an eye for intelligent programming-and, in this touring show, a flair for the unpredictable.
Financial Times 13 November 2012

given the track record of the imaginative and versatile Hebrides Ensemble, for whom predictability and run-of -the mill programming are anathema, let alone their previous successes .......true to Hebrides' form, the message was simply this:don't miss it.
Scotsman 13 November 2012  *****

The experience of hearing it (Messiaen Quartet for the End of Time) performed by Hebrides Ensemble..... was utterly transcendent....pure and ascendant....achieving a sublime quality of sound ....equalled by William Conway in the melancholic reverence of the fifth movement....
Northings 27 March 2011

Will in conversation with violinist Zoë Beyers

"William Conway, an artistic director with an eye for intelligent programming....a flair for the unpredictable."
Financial Times